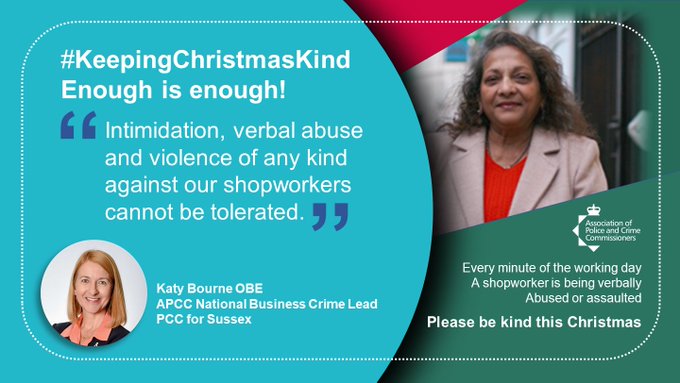 A film has been produced which features real people who have put themselves at risk working in essential shops, keeping families fed and providing vital human interaction for so many people who have been alone at home for much of the year.

The message is simple – show some kindness to our festive frontline this Christmas, they don’t deserve the abuse they’ve suffered.

National Business Crime Lead for the Association of Police & Crime Commissioners, Katy Bourne devised this campaign and is saying that ‘enough is enough’ when it comes to the abuse of shop workers. With the support of her PCC colleagues across the country, she wants to make sure that, as a nation, we are all #KeepingChristmasKind.

With uncertainty about family gatherings at Christmas as the current lockdown ends and is replaced with tiered restrictions, we are going to see huge last-minute shopping sprees and potential tensions spilling over on the high street.

There is a concern that those on our festive frontline could bear the brunt of some shoppers’ frustrations about wearing masks and distancing measures, leading to more abuse and assaults.

Mrs Bourne said: “The rise in assaults and abuse against shop workers is getting out of hand.  This pandemic has shown how important our local businesses and their staff are to our communities. Intimidation, verbal abuse and violence of any kind against our shopworkers cannot be tolerated.

“I’m seriously concerned about the impact a Covid Christmas may have on our local stores. We have all had an incredibly challenging year but we cannot stand by and watch those who have helped keep our country going, be abused in this way.

“Please share the ‘Keeping Christmas Kind’ message and help me encourage people to stop, take a step back and rethink their behaviour.”

According to retail trade union Usdaw, 76% of shopworkers say that incidents of violence, threats and abuse have been worse during Covid. Their surveys have also shown that, every minute of the working day, a shopworker is verbally abused, threatened with violence or physically attacked.

Paddy Lillis – Usdaw General Secretary has shown support for the campaign saying: “We want to remind customers to remember that shopworkers are people as well. They will be working really hard to make your shopping experience as stress-free and enjoyable as possible.

“Talking to our members who work in retail, I know that verbal abuse cuts deep. Many will go home after a shift upset about an unpleasant incident that took place at work that day and worried that it will happen to them again. That is why Usdaw, the shopworkers’ union, runs a Respect for Shopworkers campaign and supports the message to keep Christmas kind. It’s a simple message but remembering that shopworkers are working extra hard at this time and treating them with respect will mean that everyone can have a happier Christmas.”

Steve Pelling has worked in retail for over 20 years and is now a manager at Southern Coop in Hove. He is taking part in the campaign with his daughter Kayleigh. He says: “I might be a store manager, but I am also a father and, it doesn’t matter how hard you try, you always end up taking some of it home with you.

“I still try to be upbeat but it’s hard when you have someone shouting in your face or throwing beer at you. Life is incredibly difficult for a lot of people right now and we understand that but please don’t make it harder for us.”

Mrs Pratibha Paleja has been the owner of a small newsagents in Hastings for the last 32 years with her husband who was recently diagnosed with dementia. She is now a full-time carer whilst also managing the running of her much-loved family business.

In the film, her daughter Mita describes her mother as a superwoman and tells of the abuse she has faced during the pandemic: “My mum is just trying to do her job. She has been threatened with a knife, verbally abused and pushed. She fractured her wrist as a result of that. I’m worried about her safety. Please consider to be kind this Christmas, there is a family behind every business.”

Shop workers across the country are going above and beyond for their customers. Clive Sullivan describes how his Coop Store Manager wife Sammie takes it upon herself to do home deliveries for those who are self-isolating. He tells of his worry about her when she goes to work, having suffered verbal abuse and recently had a flare pulled on her by a frustrated customer.

The Government has shown a commitment to tackling these crimes, working closely with the sector through the National Retail Crime Steering Group to support shopworkers who are the victims of abuse and assaults.

Crime and Policing Minister Kit Malthouse said: “I cannot understand why anyone would be so idiotic or cruel as to assault a shopworker, so I wholeheartedly support the campaign for kindness towards them, especially over the Christmas period.

“The Government has recently set out plans to tackle this issue and working with the sector we hope to provide better protection.

“We are also committed to giving the police the resources they need to tackle crime of all types, including recruiting 20,000 additional police officers over the next three years.”

This campaign has also been financially backed by The Co-op which sees on average 730 incidents a day and The Southern Co-op which have seen an 80% rise in assaults and abuse over the last couple of months – these ranged from colleagues being threatened with knives to others being hospitalised after being attacked by shoplifters.