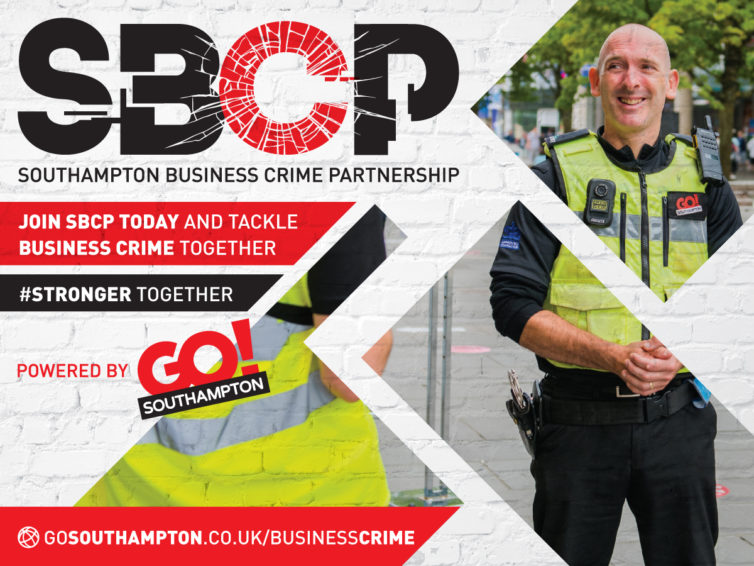 For me there is nothing more satisfying than a BCRP which punches above its weight in all aspects of its existence. Member support and engagement, proactive intelligence sharing at all levels, creative, holistic prevention and above all else a real passion to get the job done.

The thing that strikes me the most about the Southampton Business Crime Partnership (SBCP)  team is the pragmatic but ambitious approach they have for their newly formed partnership. When I caught up with Rebecca Handley, Carol Bowers and Martin Conlan to discuss how their newly formed BCRP was going, I quickly developed a new layer of respect for this BID and the efforts they were making. This is a partnership to watch out for in 2021.

GO! Southampton are a Business Improvement District which have gone that extra mile to ensure their day and night time economy levy payers are equipped with all the necessary tools to tackle business crime. Ever since it was brought together in April 2017, the BID have had safe and secure right at the top of their agenda, listening to businesses concerns around crime and disorder, particularly taking on board the key points raised by retailers through the BIDs and Business Crime: A Manifesto. The team have led many different initiatives in a bid to achieve a safer city centre but putting together a Business Crime Reduction Partnership has been by far their biggest step forward.

Southampton Business Crime Partnership was born in July 2020, in the most challenging year we have faced as a population in my lifetime for sure. But when the opportunity came up to bring together the day and night time economies in the city and really focus that intelligence sharing aspect and collaboratively tackle the challenges the city was facing, this BID took it. And that risk has really paid off with a staggering 74% of stock loss being recovered in the first 3 months of operation, equating to over £15k saved for members in stock alone. With these figures at such an early stage, I think you will agree we need partnerships like this which not only have this type of impact but can also demonstrate it through data analysis.

The team are modest and offer much of their early success to the excellent relationships they enjoy with Hampshire Constabulary and Southampton City Council and the strong support they receive from their security warden provider SWL Security.

It was not plain sailing though, how could it be in the middle of a pandemic? Challenges came from a number of places. Many of the security staff from member businesses were furloughed making that critical friend within the premises difficult to identify and engage with. This was made even more challenging by the fact that many of the businesses were new to the concept of a BCRP and may not have seen the instant benefit. This coupled with the unparalleled financial difficulties faced by so many of the businesses made for a tough roll out of the partnership.

However in the face of challenge, SBCP really stepped up and shined. The team have worked tirelessly to educate and support members and develop an operation which has already produced some fantastic results, not to mention their proclivity for creative and diverse methods to prevent crime.

Typically, in many towns and cities BIDs work with police and the local authority to manage vagrancy and those individuals who are street attached, something that can really weigh heavily on an area which aims to create a safe, welcoming and prosperous place for people to work and visit. GO! Southampton lead the City Engagement and Action Group and work with a number of other agencies which support vulnerable individuals with complexed needs with the aim to broaden the services available to them. This holistic approach feeds into the ethos of breaking the cycle, putting an end to the sausage factory system which currently exists and supporting those individuals who see no other option than to commit crime.

In addition to this, the BID have driven the Business Crime agenda within the Safe City Partnership, facilitated work done around violence and abuse in the workplace and hosted the Violence Reduction Conference in February.

Before the introduction of SBCP, GO! Southampton were already seeing results from the work they were doing with partners. They would identify and target the top 5 prolific offenders to prevent them from reoffending through a range of techniques. At the beginning of 2020 71% of those targeted were prosecuted and given prison sentences and a further 15% were given restraining orders. The introduction of SBCP provides a better foundation for this type of activity, adding resilience to the structure which I can confidently say looks like it will be here for the long haul.

Like many partnerships they operate a radio system and a crime management platform, but they also put a lot of emphasis on supporting their members daily, engaging with external agencies to prevent offenders even stepping foot through the doors of your premises and provide  education, so important to the safety and morale of a local community network.

Rebecca asked that I make a special mention to the relationship they have with NBCS and the value they see in working with us. This is always good to hear, especially considering the quality of their partnership and professionalism of their team. We have worked with the team to ensure each element of the partnership’s operation is compliant and in line with best practice. Accreditation against the National Standards for BCRPs is an incredibly important achievement for SBCP, something the team are currently going through with the support of NBCS.

Whatever your outlook on BIDs and BCRPs is, you can not ignore the efforts this partnership are making to support businesses in Southampton. They ask for one thing, to engage your business with SBCP and the work they are doing. Help them to help your stores, you won’t regret it.

To discuss joining SBCP, email one of the team at sbcp@gosouthampton.co.uk